Trofie are a type of pasta of Ligurian cuisine characterized by an elongated and intertwined shape.

They are originally from the east coast of the Ligurian territory, between the municipalities of Sori, Recco and Camogli, although today they are celebrated throughout the region.

The trofie are very widespread today, especially in the Ligurian territory and are enjoyed mainly with the world-famous pesto genovese.

The origins of this type of pasta are very ancient and uncertain: initially the trofie were born as a family product prepared at home by housewives in Ligurian villages. Ligurian women were able to give the pasta its typical elongated and curled shape through the use of a kind of wooden knitting needle, around which they rolled the previously prepared pasta.

In the past, trofie were also sold in grocery stores or restaurants, but they were always prepared by Ligurian women at home, who in turn would give them to a intermediary in charge of supplying the stores. The trofie were prepared by hand by different people, with different manual processes, and for this reason their shape and appearance varied from time to time resulting always irregular in shape and size.

This method of production was very successful in the eastern Ligurian territory for a long time, until some “intermediaries” decided to extend their trade also to towards Genoa.

In the city of Genoa, the trofie immediately became famous and consequently the exclusively homemade production was no longer sufficient. For this reason, a machine was designed to mechanize the production process and increase the availability of this typical pasta of the Ligurian East.

Here is the recipe for trofie, prepared by the_wandering_forks

Pour the semolina flour, a pinch of salt and water into a bowl and knead the ingredients together as a dough starts to form.

Divide the dough into many small pieces and start to knead them in your hands trying to give them an elongated and twisted shape.

Let them rest wrapped in a cloth for an hour.

Do you want to know more about Ligurian recipes and curiosities? Read the articles about farinata and focaccia.

Come and try the authentic trofie al pesto on our traditional gastronomic tour in Genoa!

We are waiting for you and enjoy your meal! 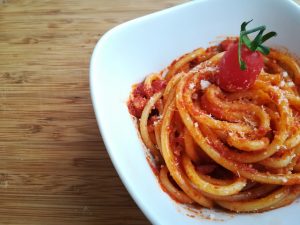