THE FOCACCIA IN GENOA: ALL THE THINGS YOU HAVE TO KNOW

The focaccia in Genoa is a real institution, a myth, almost a holy food! Fugassa in Genoa is an important food: Genoveses are proud of it, love it and are also a bit jealous of it. There’s no competition against the focaccia from Bari, and if some Milanese tries to call it white pizza, there will be disagreements!

The focaccia in Genoa is an important part of the day and still maintains a strong relationship with the story of the city.

Today we will try to explain why this food is so important for the Genoveses.

Origins and history of the Genovese focaccia

The focaccia is a food whose history dates back to long time ago. During the epoch of Phoenicians and of Carthaginians, in the Mediterranean basin, people ate Libum, a bread which can be considered as the forefather of the focaccia. Greeks and Romans prepared some variation with barely flour, rye flour or millet flour.

This food was so important that it was often left as a offering to the Gods.

The real origins of the Genovese fugassa are still a mystery. Historical testaments proved that this focaccia was used already in 1300, but we don’t know if this was the ancestor of the modern focaccia.

We know for sure that during the Renaissance the focaccia was a famous food and it was also eaten in the churches during weddings. In 1500 the bishop Matteo Gambaro was obliged to threaten the excommunication of monks and believer if they didn’t stop eating it during all the functions: people ate it also during funerals!

The modern focaccia arrived during the 1800 when there were recipes and dictionaries, the Genoveses recipe books.

The way focaccia is prepared in Genoa has changed during the centuries, but what remains is the dedication of Genoveses towards this food.

Today the real fugassa, the one you can find in the best bakeries of the town, is prepared with flour, extra virgin olive oil, yeast, marine salt, water, malt extract. It was a soft bread, not more than 2 centimeters high, amber colored, soft inside but crispy outside and stew with oil. 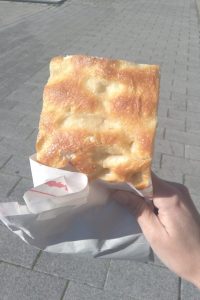 The Genovese focaccia has two variations.

We are not talking about all the imitations you can find everywhere in the world, but about real typologies of focaccia realized in Genoa and nearby.

The most famous if for sure the focaccia with onions. In this case, as the name suggests, Genoveses add onions in the focaccia. These are cut in small stripes and added only some minutes before the cooking is ready.

In the neighborhood of Genoa Voltri, there is the focaccia with cornmeal mush, a very thin focaccia which is prepared with corn flour.

Finally, moving to east, you can taste the focaccia of Recco, a food which is very different from the fugassa of Genoa. This last one is a unique dish composed by an unleavened focaccia with fresh cheese.

Originally, for the filling they used the prescinseua, a curdled cheese typical from Liguria, today considered too liquid and acid, that’s why they use the stracchino.

Some curiosity about the focaccia of Genoa

Now some curiosity about what is considered the favorite food by Genoveses. We have selected 3.

1. The focaccia has special unit of measurement

In Genoa it is sold by weigh, but even depending on special sizes:

2. The quality of the Genovese focaccia is granted thanks to the collective brand “Genovese Focaccia”

This brand was born in 1996 for protecting and valorizing this food. You can promote the membership with the brand only after having subscribed the procedural guidelines.

The bakers who follow the line guides of the making of focaccia use flour, EVO oil, yeast, marine salt, water and malt extract.

The Guinness world record focaccia was realized in Valle Stura, in Borzonasca, by making a dough with 200 kg of flour and 150 liters of water!

When and how eating the Genovese focaccia

The Genovese focaccia can be always eaten, as you maybe have already understood.

Genoveses love it, everyone have their own bakery where they go and everybody have their personal classification of the best focaccia of the city.

But when do they eat focaccia, and above all how?

The answer is difficult, that’s why everyone has their own habits.

As it is a real street food, the Genovese focaccia is perfect for a takeaway lunch, but the occasions for eating it are a lot.

Genoveses love eating it for breakfast, better together with a cup of cappuccino.

Our Genoa Gourmet Food Tour starts with this ritual!

The focaccia can be found for lunch too, eaten after a dish of pasta with pesto or filled with different cured meats like a tastier sandwich! Finally you can find focaccia also during aperitif: the best combination is a glass of white wine from Liguria together with pieces of fugassa!

We hope that your curiosity has been satisfied: next time you eat focaccia in Genoa, it will be different!

If you want to visit Genoa or have you planned a day in the city, we invite you to join one of our food tour: thanks to our local guides you will taste the famous focaccia and many other traditional dishes! We are waiting for you!

7 things to do in Genoa, Italy