tagliatelle bolognese: all you need to know

Bologna is defined “the fat” and food has a predominant importance in the city’s urban context: Bologna’s dishes such as tagliatelle bolognese, mortadella and tortellini represent a real reachness of the territory.

If for tortellini there is still a dispute between Modena and Bologna to declare the city where they were born, as far as tagliatelle is concerned, there is no doubt: they were born in Bologna!

Tagliatelle are now a national dish and over time several local and regional variations have been created, such as pappardelle, lasagnette, fettuccine and so on…

The term tagliatelle derives from the verb “tagliare” (to cut), since the pasta is obtained by cutting the previously prepared and rolled dough.  The origins of tagliatelle Bolognese are difficult to trace, but it is possible to identify one of its ancestors thanks to the poet Orazio, who in 65 B.C. spoke of the “lagane”, a type of pasta cooked with chickpeas, widespread in the Roman Empire and representing the first historical reference of pasta.

According to a legend, narrated in 1931 by the Bolognese humorist Augusto Majani, it seems that tagliatelle were invented in 1487 on the occasion of the marriage of Lucrezia di Borgia and Alfonso I d’Este, Duke of Ferrara.

According to the same legend, John II of Bentivoglio, lord of Bologna, asked the Bolognese cook named Zefirano to honour the visit of the noblewoman Lucrezia di Borgia into town and by preparing a big banquet for the occasion. The chef, taking inspiration from the blonde hair of the bride, prepared a variation of the pasta known in those days, cutting thin golden stripes and thus giving life to the famous tagliatelle.

However, this legend has no historical foundation, it’s a story invented by the Bolognese humorist Augusto Majani.

Characteristics and curiosity of Tagliatelle Bolognese

The original tagliatelle Bolognese have a precise and determined length.

In 1972, in fact, the Confraternita del Tortellino and the Italian Academy of Cuisine deposited at the Bologna Chamber of Commerce the precise size of the real tagliatelle Bolognese, the original recipe and a reproduction of an original gold tagliatella was exhibited at the Palazzo della Mercanzia.

On that date, it was established that in order to be original and perfect, tagliatelle Bolognese must correspond to the 12,270th part of the height of the Torre degli Asinelli, i.e. 7 mm of the pasta still raw, which corresponds to 8 mm of the width of the cooked tagliatella.

The thickness of real tagliatelle alla bolognese, on the other hand, has not been determined exactly, but according to practice must usually be between 6 and 8 tenths of a millimetre.

Finally, as far as the recipe is concerned, the classic recipe for tagliatelle Bolognese includes 1 egg for every 100 g of flour.

Subsequently, on 17 October 1982, the original recipe for Ragù Classico alla Bolognese, a typical condiment for tagliatelle, was also deposited at the Bologna Chamber of Commerce, the only authority where it is possible to deposit the recipes of typical Bolognese dishes.

After several years in which different versions of the Bolognese ragù were proposed, in that year a unique procedure was adopted to prepare the real ragù of the Emilian city, which differs from the Neapolitan one present in the cuisine of Campania.

Here is the traditional recipe of tagliatelle, to be served strictly seasoned with Bolognese sauce.

On the cutting board, place the flour into a volcano-like shape and break the eggs in the middle. Add salt and mix. Continue to knead by hand, adding flour if necessary, until you obtain a dough.

Then cover the dough and leave to rest for about 30 minutes.

Spread the dough with a rolling pin until the desired thickness is obtained. Pulling the dough is not easy and you need a lot of experience…that of the typical “sfogline”!

Once the “sfoglia” is ready, let it dry for about half an hour, roll the dough around the floured rolling pin and remove it by cutting the noodles with a knife at a width of 7mm. 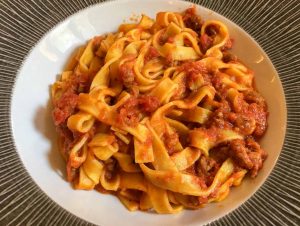 The traditional Emilian cuisine provides that the real tagliatelle alla bolognese are seasoned with meat sauce, but it can also be used to season lasagne. Here is the original recipe!

Melt the diced bacon in an earthenware pan and previously chopped. Add 3 tablespoons of olive oil or 50 g of butter, the finely chopped carrot, celery and onion and let it cook over a gentle heat.

Then add the minced meat, stir well and let it brown.
Wet with the wine and stir gently until it evaporates.
Then add the tomato puree, cover with a lid and cook over low heat for about 2 hours adding, if necessary, a few tablespoons of broth. Towards the end, add the milk and sprinkle with salt and pepper.

The Bolognese tradition also provides for the addition of fresh cream in the case of dry pasta, while for tagliatelle it is not necessary.

You can try the original tagliatelle Bolognese and many other typical dishes on our food tour in Bologna! 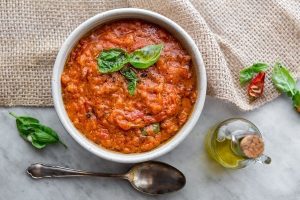 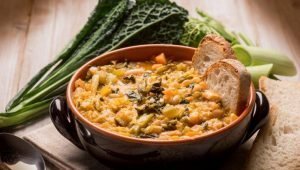 The Ribollita, the “poor” Tuscan recipe