The Sfincione, in dialect “u spinciuni”, is one of the most famous street food in Palermo and represents, together with arancini and panelle, one of the culinary symbols of the city. In Palermo it can be found everywhere, from the markets to the fryers, and is one of the most traditional and loved recipes of the Sicilian city, which is why it has been included in the list of traditional Italian food products (PAT).

In the past the sfincione was prepared mainly during the Christmas period and for special events, while today it is eaten all year round.

Tradition, however, has it that the sfincione is on the table during the Eve of the Immaculate Conception dinners in Palermo.

The name of the sfincione most likely derives from the Greek spòngos, or “sponge”, which indicates its main characteristic, namely its softness.

According to the Arabic derivation, instead, the term was used to indicate a soft dough pancake enriched with honey.

Legend has it that the ancient recipe of sfincione palermitano is due to the Sisters of the Convent of San Vito who prepared this specialty on New Year’s Eve. The original recipe of sfincione prepared by the nuns, however, seems to have been much richer than the current one and also included other ingredients such as minced meat, salami and peas.

This recipe, intended mainly for the clergy, was then also proposed by the local population in a ” poorer” version, with anchovies, onion, breadcrumbs and cheese. It was then at the beginning of the twentieth century that the tomato, , a characteristic ingredient of the current recipe,  was added.

Others claim instead that the sfincione was invented by vendors near Porta Sant’Agata, to whom we owe the “sfincionello”, a smaller, round version of the famous sfincione.

Here is the recipe to prepare the famous sfincione of Palermo at home.

Ingredients for the dough

Ingredients for the seasoning

Pour the flour into a bowl, add the sugar and brewer’s yeast dissolved in a little warm water and mix. Continue to knead adding salt and oil.

Once the dough is compact enough, let it rise for about 2 hours.

Then prepare the seasoning, browning the sliced onion with olive oil and water for about 10 minutes.

Once the onion has withered, add the peeled tomato and cook for at least 20 minutes over low heat. Season with salt and oregano.

Sprinkle a baking pan with breadcrumbs and roll out the dough, which must be at least 1 cm high.

Put on top of the dough the salted sardines in pieces, the slices of fresh caciocavallo cheese and finally cover everything with the tomato sauce.

Finally, add the grated caciocavallo cheese over the whole dough and a final layer of breadcrumbs (lightly press the breadcrumbs with a spoon to absorb the seasoning).

Add a drizzle of oil to the seasoning and let it rest for a further 30 minutes. Bake at a temperature of 250 degrees for about twenty minutes.

Do you want to know the history, recipe and curiosity of the Sicilian cannolo? Click here! If you are in Sicily and want to taste local specialties in the best venues, try our street food tour in Palermo!

Genoese, graduated in Economics and passionate about marketing, is the founder of Do Eat Better. He loves travelling and discovering new places and cities with the eyes and taste of "Locals". 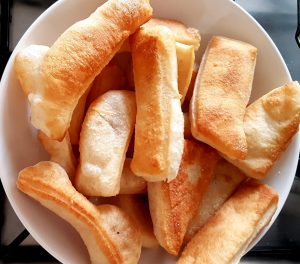 Sgabei: recipe of a Lunigiana delicacy