Pitta di patate salentina is a very old dish, typical of the city of Lecce. This very popular recipe in Apulia is prepared with simple and substantial raw materials and looks a lot like the Potato Gateau, typical of the Neapolitan tradition from which it probably derives and from which it differs mainly for the lack of two ingredients: nutmeg and butter.

In Apulia there are a number of variants of the potato pitta and in some areas it is called “potato pizza”.

On August 17, 2019 the “biggest potato pitta in the world” was prepared in the village of Cutrofiano with about 10 meters in length and 1 meter in width for a total of 1000 portions.

Here’s the recipe for the “Pitta di patate salentina” by dolci_pasticci_di_fra!

Boil the potatoes in plenty of water until cooked, peel them, mash them with potato masher and let them cool.

Slice the onions and put them in a pan with plenty of olive oil and chili pepper, after about ten minutes remove the chili pepper and add the tomatoes cut into slices, salt, pepper and a bit of oregano.

In a bowl put the potatoes and add the egg, cheese, salt, pepper and oregano and knead.

If it is too soft add a handful of flour.

Compose the pitta: cover a baking pan with baking paper, put half the potato dough on the bottom and the layer of onion filling. Put the rest of the potato dough in a star-tipped piping bag and cover the whole surface with tufts.

Add a sprinkling of oil and a little bit of oregano.

Bake at 200 degrees for about half an hour.

The last 5 minutes ventilated to toast the surface.

Do you want to discover the history, recipe and curiosities of other traditional Italian dishes? Click here! 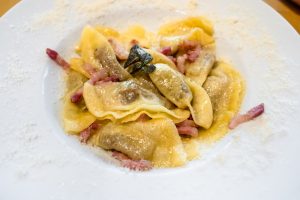 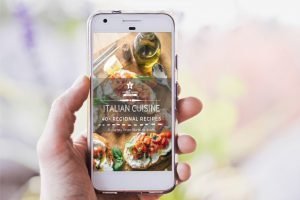