pesto genovese: all you need to know

Pesto genovese is famous and appreciated all over the world, but in Genoa it is a real institution so much so that it is called “the green gold of Genoa”: there is no family in the city that does not eat it at least once a week and this is the favourite seasoning of adults and children.

Pesto is, together with focaccia, the culinary symbol of Genoa and the locals are very strict about the ingredients and the method with which it is prepared.

Nothing else: walnuts, almonds and other cheeses are absolutely not allowed and don’t try to tell a Genoese otherwise 😊 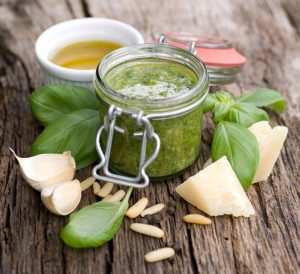 Origins and history of pesto genovese

Pesto genovese is now recognised as one of the traditional food products by the Ministry of Agriculture.

As regards the etymology of the name, the name pesto is due to its method of preparation, i.e. the pounding of the leaves and other simple ingredients inside the traditional marble mortar (the “murta”), using a wooden “pestellu” (pestle).

The real recipe does not date back to very ancient times, although already in the Middle Ages in Liguria aromatic herbs were used by the locals to enrich their banquets. Basil, today the main condiment of the current recipe for pesto genovese, was a herb widely used even in ancient times and derives from the medieval Latin basilicum which means “royal herb”.

An ancestor of pesto genovese is probably also represented by “moretum”, an ancient sauce obtained by pounding a mixture of herbs, oil, cheese and walnuts, whose preparation is also described in a poem attributed to Virgil.

The recipe of this famouse sauce seems to be also the evolution of an older procedure, that of the “aggiadda”, a mortar sauce made with garlic from the 13th century, mainly used for preserving cooked food.

This garlic sauce has played an important role for the Genoese sailors for a long time, as garlic was considered almost as a medicine, and this sauce was eaten by the sailors themselves in large quantities to prevent disease during their sea journeys in poor hygienic conditions.

The recipe for pesto genovese was first written in the second half of the 19th century by a famous gastronome, a certain Giovanni Battista Ratto, who explained in his work “La Cuciniera genovese”, the first and most complete book on the gastronomy of the Ligurian territory, how to prepare this famous sauce:

“Mix together a clove of garlic, basil or, in the absence of this marjoram and parsley, grated Dutch cheese, Parmesan cheese and pine nuts and ground it all in a mortar with a little butter until it is reduced to a paste. Then melt it with plenty of fine oil. With this whipped mixture, season the lasagne and gnocchi, adding a little hot water without salt to make it liquid “.

The presence of Dutch cheese instead of Sardinian pecorino in the recipe for pesto genovese described by Ratto is due to the fact that Gouda cheese was widespread in Genoa due to maritime trade, while marjoram or parsley as an alternative to basil are justified by the fact that in Liguria, at that time, basil was seasonal and therefore not available all year round.

The gnocchi mentioned by the gastronome are instead the elongated and twisted ones, not to be confused with the original Recco trofie, which today represent the most common type of pasta with pesto as a condiment.

Pesto genovese is also linked to the famous legend of San Basilio, a monk who, on the heights of Genoa, collected the aromatic herbs (including basilium, or basil) and began to combine them and pound them together with the ingredients offered by believers, thus obtaining the first recipe of pesto genovese, later perfected over time. 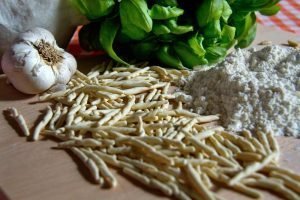 Some curiosities about pesto genovese

Here are a few curiosities  that not everyone knows.

The “green gold” of Genoa has become famous all over the world thanks to the crews of the ships that carried the famous sauce and helped to spread it and make it known even in distant places.

2) It is present in a Walt Disney comic book

Walt Disney, on the occasion of the Colombiadi in Genoa in 1992, dedicated a character from its comics to the famous Genoese sauce, with the creation of the “Adventures of Paperin Pestello e le Vie delle Indie”.

3) Since 2007 the Pesto Genovese World Championship at Mortar is organized in Genoa.

The world championship of mortar pesto is organized by Palatifini Association and boasts numerous registrations from all over the world. 100 competitors compete by preparing pesto in the traditional way and using only authentic ingredients.

How and when to eat the real pesto genovese

Pesto, as mentioned, is never lacking in the kitchens of the Genoese and can be found in all the city’s restaurants and trattorias.

It is usually served at lunch or dinner as a condiment for pasta, typically with trofie, gnocchi, testaroli or trenette.

It is also spread on focaccia, bruschetta and even on farinata!

In short, in Genoa pesto is present almost everywhere and it is difficult to do without it!

If you are planning to spend a day in Genoa, we invite you to take part in our traditional food tour in the Ligurian capital: thanks to our local gastronomic experts you can taste the original pesto and many other traditional dishes in the best places in town! We are waiting for you! 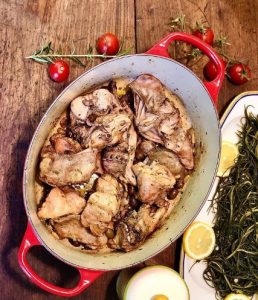 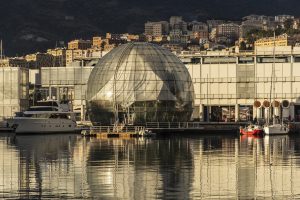 Aquarium of Genoa: everything you need to know 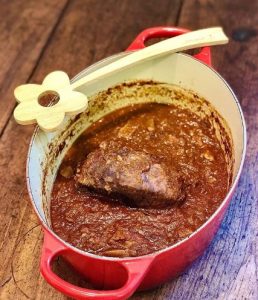