The pear and ricotta cake is a creation by Salvatore De Riso, famous master pastry chef of the Amalfi coast.

His ricotta and pear cake is a mix of flavors and creativity, a unique dessert that has had international success and is now imitated by everyone. This cake is a result of his homeland whose flavours he wants to reproduce: the pears of Agerola, the ricotta of Tramonti and the hazelnuts of Giffoni are the protagonists.

This delight was born in 1998 in the small workshop of Salvatore De Riso in Minori. The idea was to create a new, but simple dessert using only local products. And so the ricotta and pear cake was born, composed of two delicious Giffoni hazelnut biscuit discs that contain a cream of ricotta and candied pears.

Today we propose the version of sapu.ri, a different version from the original, in which the two discs of hazelnut biscuit are replaced by those with almonds.  A sweet extraordinarily simple but with a guaranteed result!

It will take just one hour of time and two hours of refrigeration to compact the filling. 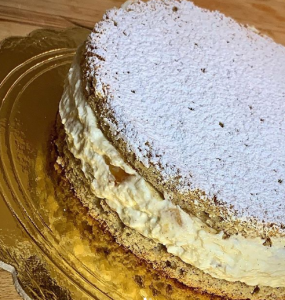 Peel the pears, cut them into cubes and place them in a pot with a knob of butter, a tablespoon of lemon juice and half a tablespoon of sugar. Cook the pears over medium heat for about 15 minutes, stirring occasionally.

Once cooked, transfer them to a flat plate so that they cool.

Whip the egg white of one of the two eggs with a pinch of salt and set aside.

Whip the remaining yolks and egg white with the sugar until you get a light, frothy cream. Add the almond flour, the 00 flour, the melted butter and the vanilla flavour (half a vial, the seeds of a vanilla berry or a pinch of vanillin) and when the mixture is homogeneous, add the previously whipped egg white, stirring gently from the bottom to the top.

Grease and flour the cake-mold, pour half of the mixture into each one and cook at 200°C for 10 minutes. The cooking time varies from oven to oven so always try the toothpick test before baking. If the stick comes out clean, the almond biscuit is ready.

Once cooked, let the cookie dough disks cool on a flat surface.

While the bases are cooling, proceed with the preparation of the ricotta cream.

In a bowl work the ricotta with the sugar, add the vanilla aroma, a pinch of salt and the pears previously caramelized and now cold.

Whip the cream well and incorporate it gently into the ricotta cream with movements that go from the bottom to the top. Place the cream thus obtained in the refrigerator.

Proceed with the assembly of the cake. Place one of the two discs of almond biscuit on the base of a Springform pan. To make it more delicious, cover the disc with a light layer of previously melted dark chocolate.

Then pour the cream of ricotta and pears levelling it as much as possible and cover with the other disc of biscuit dough pressing gently.

Place the cake in the fridge for at least two hours or in the freezer for an hour. The longer it stays there, the better.

After the hours of rest, unmold the cake, transfer it gently to a serving plate and sprinkle the surface with icing sugar.

Do you want to discover other typical recipes? Read our blog! 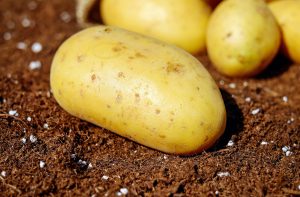