Palermo can really be considered one of the main street food capitals of the world. Among the narrow streets of the historic centre and the noisy market stalls, street vendors sell tasty dishes of a tradition that has lasted for centuries. The rulers who came to Sicily during the past eras left on the island ingredients and traditions that still characterize the local culture today… and the food is no exception! Arabic, Spanish and French influences are mixed in strong, decisive, but also delicate and refined tastes, certainly always inviting. In this article we want to talk about Palermo street food and recommend some of the best dishes to taste around the Sicilian capital!

The pane ca meusa (bread with spleen, in Italian) is one of the most famous street food in Palermo. The dish consists of a sandwich stuffed with veal entrails that is often accompanied by a few slices of lemon to squeeze on it or a bit of caciocavallo cheese.

Usually the spleen of the beef is used, occasionally the lung and the trachea are added. The offal is cooked in lard and then served in the typical Palermo circular sandwich covered with sesame seeds.

A dish for strong palates that can be found in the best markets of Palermo.

If you like giblets, after tasting the pana ca meusa, you’ll have to taste the stigghiole. This is another dish that comes from the poor tradition of Palermo and is made of lamb guts skewers seasoned with parsley and cooked on the grill.

It is easy to find this dish during festivals and village fairs or along streetsides. From what do you recognize that the baracchino sells stigghiole? By the amount of smoke released from the embers!

The crocché, more commonly known as cazzilli, are simply elongated potato croquettes (hence the popular name) seasoned with parsley. They are usually served together with another highlight of Palermo’s street food, panelle.

These chickpea flour pancakes are a legacy of Arab domination.

Today they are eaten alone seasoned with a little salt and lemon or inside a sandwich: bread and panelle is one of those dishes that you absolutely must taste in Palermo! 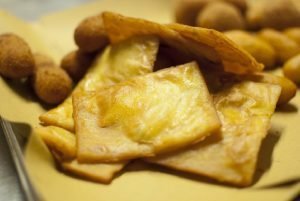 Rascatura means simply “scraping” and is one of the poorest and tastiest street food in Palermo.

The dish was invented by “panellari” who every day scraped the bottoms of the pans where they baked crocché and panelle and with the leftovers they prepared a new dough to fry.

Nothing is thrown away in Palermo!

There’s Roman pizza and Neapolitan pizza… and then there’s the sfincione! Don’t call it pizza, though: it’s a whole other thing!

The name seems to derive from “spongia”, that means sponge: its consistency, in fact, is porous and soft just like a sponge. The topping is composed of tomato, onion, caciocavallo cheese, capers and anchovies: a real treat for lunch or a quick snack!

Here we come to what is one of the most delicious food in Palermo: His Majesty the arancina!

The arancino, the world famous rice timbale, in Palermo is “fimmina” (female): remember it when you go to order it and call it arancinA!

This dish, like many others in the Sicilian tradition, is a legacy of Arabic domination.

The famous rice balls are prepared with care and, although there are several variations, the classic recipe of arancina includes saffron flavoured rice seasoned with meat sauce and caciocavallo cheese. 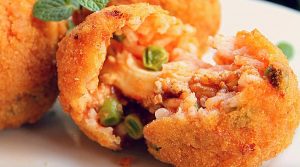 Now let’s move on to dessert. What’s better than closing a lunch with a Sicilian cannoli?

The king of Sicilian pastry is made up of a fried wafer that is filled on the spot with a cream of ricotta to which you can add pistachio nuts or a few drops of chocolate.

The cannoli can be found a bit ‘everywhere in the city and often its size is really huge! 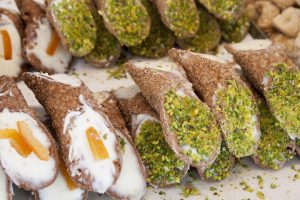 If the cannoli are too much to close a lunch, then you could opt for a nice “granita”!

Sicily is the home of the granita and you can choose from an infinite number of flavours: the fruit ones are excellent (among all, the mulberry one is excellent), but you should also try the pistachio and coffee one, maybe with a little fresh cream topping!

In Sicily it is customary to start the day with granita and don’t be surprised if at breakfast they offer it: in summer, with the hot temperatures of the island, we are sure you will be pleased!

Where and how to taste the Street Food of Palermo

If you are planning to visit the Sicilian capital and spend even just a weekend in Palermo, you can’t miss a walk through the city markets: between the stalls of Ballarò, Capo and Vucciria you will find the best proposals of street food. You’ll get lost among the scents that rise up from the street vendors and you’ll discover an authentic city still tied to tradition.

If you want to taste the best street food in Palermo the suggestion we want to give you is to participate in our Palermo Street Food Tour: together with a local guide, in fact, you will discover the best traditional dishes while you have the opportunity to admire the city and its most characteristic places. During the tour, for example, you will taste the sandwich with panelle and crocchè, the one with meusa, sfincione and, of course, arancina!

Go and have a look at our proposal: we are waiting for you!

Booking is very simple: just send us an email to reservations@doeatbetter.com or contact us through WhatsApp at +39 329 17.90.647.

Ready to discover together the street food of Palermo? 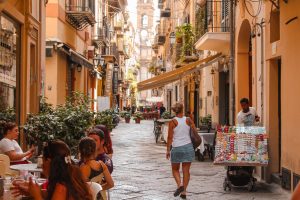 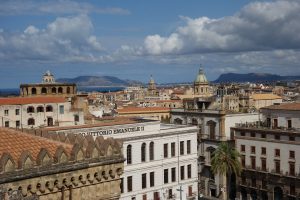 10 things to see in Palermo absolutely 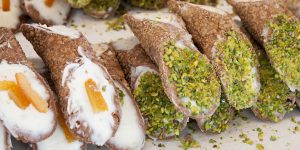