APERITIVO IN mILAN, "THE HAPPY HOUR": HISTORY AND TRADITION

Since the V century b.C, when Hippocrates started prescribing to his patients affected by loss of appetite, the vinum hippocraticum, a drinking he made with wine and herbs, years passed but the main idea of the aperitif didn’t change.

In the Latin language aperitivus means “which opens” because these drinks were used for opening the stomach and for stimulating the appetite and already served since the Roman period.

For this reason these drinks, which today are served before dinner, still maintain their bitter aftertaste…that’s why!

The real aperitivo, the one which lost its therapeutic aim for becoming a real food habit, was born in Turin in 1786 thanks to Antonio Benedetto Carpano. He was the owner of a small shop in Piazza Castello and he started producing an aromatized wine which became famous as the best aperitivo: the vermouth.

Since that moment, the habit spread all over Italy and arrived in Milan too.

In Milan, after Mr. Carpano, Ausano Ramazzotti too invented a liqueur drink with 33 herbs and in the countryside of Novara Gaspare Campari created an alcohol infusion and this recipe has never been revealed!

Among the local and foreign influences, the tradition of aperitivo in Milan became deeply-rooted, turning into a real social phenomenon, the “happy hour”!

The regional county seat of Lombardia is a city which reborn every morning and pulsates like a heart; Milan is positive, optimist, efficient; Milano is for living, dreaming, enjoying.

This was the advertising slogan of Amaro Ramazzotti which in 1985 ended with the claim Drinking Milan.

After some years that sentence has been compare to the big “Tangentopoli” scandal, but before this, the sentence was synonymous of wellness.

During those years everything seemed possible and young people of the upper classes met in coffee bars eating nuts and drinking cocktails after a long working day.

The aperitivo myth was strengthening.

Since 2000 Milan becomes the capital of the Italian aperitivo. During those years the so called Happy Hour became a trend.

If in the English or American coffee bars this expression meant that hour when the cocktails were preparing with a special prize, in Italy this expression was used as a synonymous of what today we call Apericena (mix of aperitivo, aperitif and cena, dinner).

Milanese coffee bars started to offer cocktails with a fixed price which gives free access to an unlimited buffet. The cocktail is not more served only together with nuts, French fries or olives, but with sandwiches, small pizzas or small portions of pasta, salami, cheeses and so on.

At the beginning it was only a smart idea which consisted of encouraging people to remain into the coffee bar and continuing ordering, but it soon became a habit.

In this way the aperitivo became a real dinner and it’s now called “Happy hour”!

The places of Aperitivo in Milan

Now that you know its story, you’ll be interested in knowing where to make a real Milanese aperitivo.

Here are some suggestions.

The centre of Milan is the best place for having a glamour aperitivo: one of the rooftop coffee bars is a fantastic place for drinking a cocktail while watching the beautiful view of the cathedral and its square. 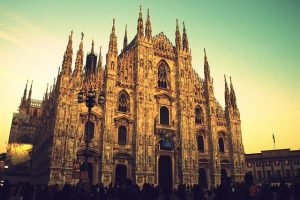 The Navigli is a famous area for Milanese aperitivo and Do Eat Better Experience has chosen this place for one of our funny food tours.

Among all the pubs, a local expert will come with you through the Milanese tradition, among a glass of wine, a cocktail and tasty snacks. A tour dedicated to the Milanese aperitivo MUST takes place in the nightlife part of the city! 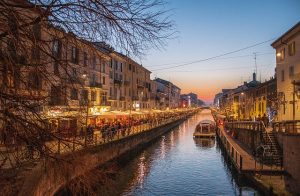 Today the aperitivo in the Città Studi (literally city of the studies) area is casual and informal, but in this area you can find one of the historical coffee bars: Basso Coffee Bar. In this place maybe the so called Negroni Sbagliato was born.

Between Corso Sempione and the next Park, you’ll find nice coffee bars where you can have a real aperitivo. During summer the park hosts many interesting events. Don’t miss them!

Brera is synonymous of bohemian atmosphere: here you’ll find chic and vintage coffee bars. In Via Brera 32 there’s another historical coffee bar of Milan, the Jamaica, meeting point of artists and intellectuals. Its story starts in 1911 and still continues today.

What ordering during a Milanese Aperitivo

Now you know where to go, so here are some suggestions of what asking while having an aperitivo in Milan. 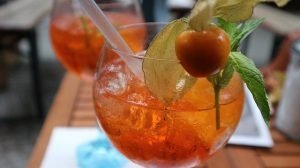 So you can’t visit Milan without experiencing one of the most important part of the day: the Milanese Aperitivo is part of the tradition! So, Cheers! 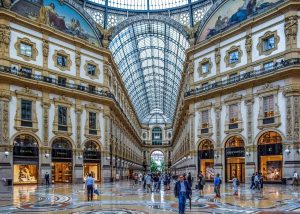 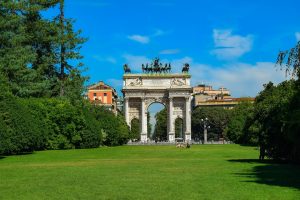 10 day trips from Milan not to be missed 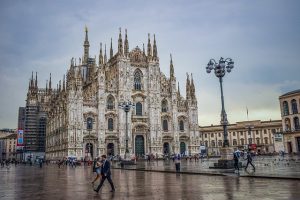 The best pastry shops in Milan